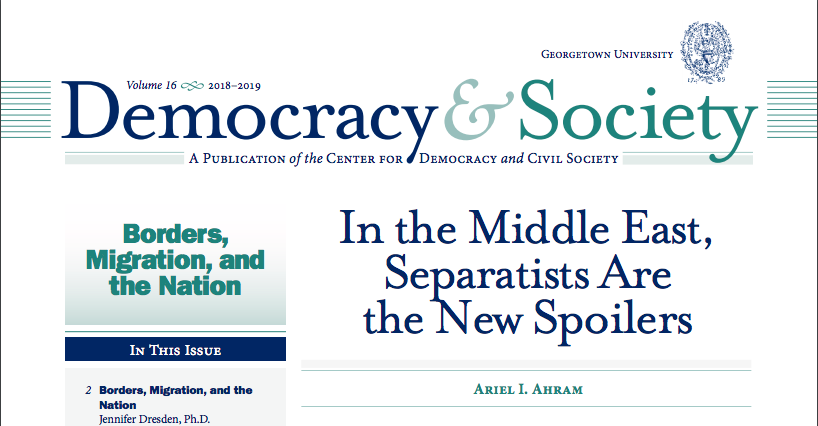 “This issue of Democracy & Society takes up the timely issues of borders and identity, and what they mean for democracy and (especially) stable governance today. Under the theme of “Borders, Migration, the Nation,” the contributions in this issue all grapple with questions of boundaries, whether they be physical or conceptual. The articles that follow span geographic regions and particular focus, but all are rooted in this same question: what are the causes and effects of dividing people and polities? The issue opens with an insightful contribution from Ariel Ahram, Associate Professor at Virginia Tech’s School of Public and International Affairs. Ahram is a specialist in Middle Eastern politics and security and has written extensively on questions of governance, authoritarianism, and stability. Drawing on his recent book Break All the Borders: Separatism and the Reshaping of the Middle East, Ahram argues that separatists—those looking to build new borders—are likely to be a key force undermining Middle Eastern stability for the foreseeable future.” – Jenniffer Dresden, Ph.D.

Read it here: Volume 16: Borders, Migration, and the Nation